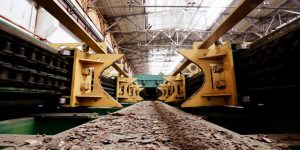 Bituminous and Sub-Bituminous Coals when given the right mixture of oxygen, moisture, heat and time are subject to Spontaneous Combustion or Self Ignition due to which they begin to smolder. If a smoldering chunk of coal or ember is introduced onto a conveyor during a loading/unloading operation, it may be conveyed to a Transfer Station, Crusher or Bunker. At such locations, the coal ember may ignite the coal dust around it and cause a coal dust explosion, which may lead to loss of life and downtime. Embers can reliably be detected only on the conveyor belt itself since at other locations, such as in a Stockpile, the ember may be buried under other coal. The Series 4600 Infra Red Ember Detectors are used to detect embers moving on the conveyor before they reach the subsequent processing machinery or storage hoppers. If the ember is allowed to reach the separation device it could lead to a rapidly expanding fire, fanned by the air movement. The Series 4600 Detectors sense the Infra Red radiation emitted by the hot CO and CO2 produced by the coal ember and respond when the ember enters their field of view.

The Series 4600 Detectors should be mounted on the conveyor hood or gantry structure, looking down at the coal being transported. The maximum sensitivity of the Series 4600 Ember Detectors is 10 (w which corresponds to a (nominal) 6.25 sq. cm (1 sq. inch) glowing coal ember traveling at a distance of 1 meter (3.28 ft) from the detector. Since the HPCV of the Detector is 90 degrees across the belt, it should be mounted at a height equal to half the width of the conveyor belt ensuring that the entire belt is covered by one detector as shown below. For increased sensitivity, two or three detectors as shown below should be positioned closer to the belt taking care that the edges of the belt do not fall outside of the Detector HPCV.

The general rule in fire protection systems for conveyors is to locate Ember Detector(s) upstream from a change in direction (transfer to another conveyor) or a dust producing process or storage point. Hence, once the ember is detected, it can be extinguished before it enters the next process where it can cause a potential explosion. Based on a Fire Protection and Control standpoint, a minimum of two Series 4600 Infra Red Ember Detectors are recommended for each conveyor. Detector D1 should be close to the tail pulley and D2 close to the head pulley, wired as separate zones on the Control Panel.

The exact location of the Series 4600 Detectors and Extinguishing Sets should be decided at site based on the belt speed, belt coasting time and belt coast distance.